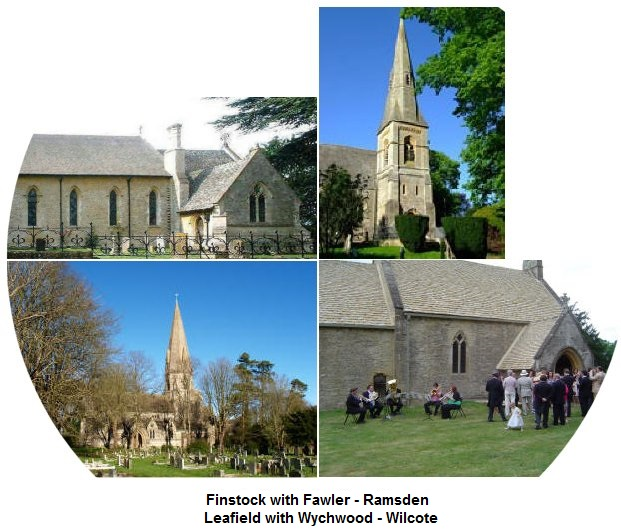 St Michael and All Angels, Leafield with Wychwood

See below for Project St Michael

The present church was built in 1859-60 to a design by Sir George Gilbert Scott, one of a trio of eminent Victorian architects. The original spire was rebuilt in 1865 and further shortened in 1934. Even so, the church is visible for many miles around and is a much loved local landmark. Some eleven years after completion of the church, a fine organ by Nicholson of Worcester was installed and is in use to this day. Sadly, the contemporary sheet metal scrolls with painted texts by the vicar’s wife, which decorate many interior aspects of the walls have now faded. The tower houses a peal of eight bells, dedicated in 1874 and a tower clock was commissioned the following year. The church (Grade 2*) is listed together with the First World War memorial lych-gate. Following a review, plans are being formulated to update the interior of the church to improve its suitability for present day family worship, whilst maintaining its historic design features.

To invigorate the life of Church and Community - Renewal

Holy Trinity was consecrated in 1842 as a Chapel-of-Ease serving under the Vicar of Charlbury but by 1860 it became a separate parish with its own vicar. At this time the building comprised the present nave with a gallery built on land provided by the 1st Lord Churchill of Cornbury.

Although located on the border of Finstock village and a mile from Fawler the church thrived and at the turn of the century the building was extended by the addition of the present ornate Choir, Sanctuary and Vestry. A new organ was installed and, due to relocation of the choir, the gallery could be removed. This was completed by 1906.
Worship is Anglican mainstream and a review of parish requirements at the end of the twentieth century, identified the need for space for Sunday School and other activities. The present Upper Room fulfils this need and, with the repositioning of the Rood Screen towards the rear of the Nave, the main worship area is made more accessible and the acoustic is improved.
Holy Trinity has literary connections, Barbara Pym, the novelist, worshipped here for many years, as did Gilbert Phelps. T S Eliot was baptised privately here in 1927, a few weeks before publication of his poem Journey of the Magi.

Succeeding an earlier church of 1842, the present church, built in 1872 is the youngest of the four in the benefice. Raised by the incumbent, Revd R L Baker, to the designs of A W Blomfield, the porch, tower and spire were given by Mr Baker in memory of his wife Mary. In 19th century Decorated Gothic style, the Nave is unornamented except for the oak Chancel Screen which separates the fine chancel with Resurrection window and alabaster reredos with symbols of the four evangelists. The church occupies a central position in the village, at the intersection of the High Street and the Roman Akeman Street. With a tower ring of three bells, the call to prayer may be heard across the benefice. Notably, the South Aisle is now screened from the main body of the nave by a twenty first century glass and oak screen, providing a facility for Sunday School and weekday worship separate from the main worship area. It is a source of pleasure to the parishioners that descendants of Revd R L Baker still live in the village and worship here.

The small church in the middle of the mediaeval village of Widelicote (Domesday Book) has its origins in the 12th century or possibly earlier. A rounded doorway (now blocked) in the South side of the Nave is evidence of Norman origins but most other details have been subsumed by the Victorian restorations of H Woodyer (1858) and A W Blomfield (1868). The resulting interior is simple but with an interesting squint in the wall between Nave and Chancel, just behind the Victorian pulpit. The North porch, a Blomfield addition, opens on to the Nave with a Victorian (?) font at the West end. Without electricity until the twenty-first century, the original oil lamps on the pew ends remain. The small churchyard contains a small number of graves at the east end, representative of Victorian, and later, internments. As with all the other churches in the Benefice, Saint Peter’s church is open for visitors and private prayer on most days.

6.00pm, Service to celebrate Her Majesty

10.30am, Service to celebrate Her Majesty

Print | Sitemap
The Church of England: A Christian presence in the communities of Ramsden, Finstock, Leafield and Wilcote
Login